Wizkid Attends Asake’s Show, Stands Without Bouncers As He Allows Fans Snap Pictures With Him in Video 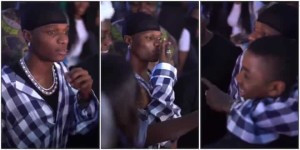 Nigerian singer Ayodeji Balogun aka Wizkid is currently in Nigeria for the Detty December season and he seems to be having a good time.

The More Love, Less Ego (MLLE) crooner recently touched down in Lagos and made sure to make an appearance at singer Asake’s second Flytime show.

Wizkid was spotted looking casual in a video that surfaced in the online community. The singer was standing just beside Flytime boss, Cecil Hammond, who was also enjoying the performances on stage.

However, fans who spotted the singer didn’t let him be as they took turns approaching him for pictures.

Surprisingly, there was no bouncer to stop the fans as Wizkid gleefully posed for the camera and allowed his fans to enjoy the rare moment with him.

Watch the clip as sighted online below:

The post Wizkid Attends Asake’s Show, Stands Without Bouncers As He Allows Fans Snap Pictures With Him in Video appeared first on TRENDJAMZ.