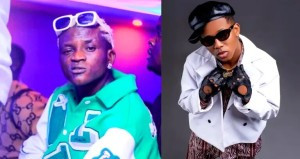 Controversial Nigerian singer, Portable, has indicted his counterpart singer, Small Doctor over the attack hurled at him (Portable) at an Agege show on the eve of Christmas.

In a fresh call out on social media, Portable claimed Small Doctor was beefing his glory, as he rained curses on the Agege musician.

angry fans pelted Portable with bottles, while on stage in Agege as the crowd stopped him from performing, days after he reconciled with Small Doctor on social media.

The Zazu Zeh crooner shared a new video, accusing Small Doctor of masterminding the attack out of beef for his glory. “You dey beef my glory,” Portable said.

Meanwhile, Portable has threatened Small Doctor after he was stoned while performing in Agege.

In an Instagram post, which now been deleted, the controversial singer who seemed convinced that Small Doctor was behind what happened to him on stage in Agege, stated, “Na Small Doctor run the package.”

Portable stated that Small Doctor is envious of him because he is the bigger music artiste.

According to Portable, Small Doctor was the one who told the crowd to attack him and despite that, none of the things they threw hit him.

The Zazu performer warned Small Doctor not to come to any show in Ogun state because he will tell his boys to strip him naked and beat him up.

Portable recalled that has beaten him (Small Doctor) up in the past at show promoter Abu Abel’s house and he will do it again wherever they happen to meet.

He also went ahead to mention places where he would deal with Small Doctor if he happens to meet him there, places like Ibadan, Sango, Oshogbo, and Ilorin.

The post Portable vows to deal with Small Doctor following attack on him in Agege appeared first on TRENDJAMZ.