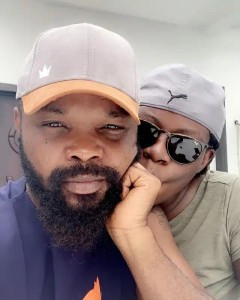 This comes less than two years after the OAP had a fall out with his ex-wife, Uzoamaka Ohiri, over an alleged domestic abuse and paternity scandal.

The socialite appears to have found love again as he takes to his social media to show off the new lady who has his heart.

He posted a beautiful picture of him and his new lover striking a pose and looking into each other’s eyes on a bridge.

Sharing the photos on his page, he described her as the Queen of the castle.

The post Nedu Wazobia shows off his new lover appeared first on TRENDJAMZ.