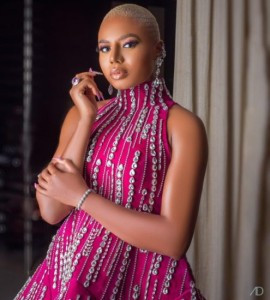 Nollywood star and media personality, Nancy Isime has given an insight into how the scene where she went ‘totally unclad’ in new Netflix movie, Shanty Town, was shot.

Isime played the character, Shalewa, in the crime and action film which dropped on the giant streaming app on Friday, January 20.

Responding to questions on the controversial nude scene where veteran actor, Richard Mofe Damijo who played Chief Fernandez in the movie groped her breast and ass, the actress revealed that the body on display wasn’t hers but that of her body double.