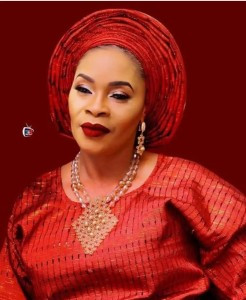 Actress Remi Surutu has revealed that many of her colleagues in the Yoruba movie industry depend on Babalawos to shine.

Speaking at her mother’s burial which was held in December in Lagos, the actress, Remi Surutu stressed that she was raised by her late mum to only rely on God.

“It’s only God I have and depend on, while some of my colleagues depend on Babalawos, my mother taught us the way of God and I’m walking in that path today”

asides from actor Yomi Fabiyi who honored the veteran actress with his presence, many celebrities were conspicuously absent at the burial.

Remi Surutu was left alone too bury her late mum with just a few friends and family members as none of the industry colleagues showed up.

Meanwhile, Nollywood actresses, Wumi Toriola and Funke Etti have tendered an unreserved apology to their senior colleague, Remi Surutu over their absence at her mother’s burial.

Taking to Instagram, Wumi pleaded with her fans to help her begged the actress. She revealed that she has been unable to pick Remi Surutu’s call because she was scared the actress would lash out at her.

“I missed @therealremisurutu mum’s burial and I couldn’t even pick call cos I nor wan hear shege. Pls help me apologize to her and tell her I love her”.

Taking to Wumi’s comment section, Funke Etti also apologised to Remi Surutu over her absence a the funeral.

“We plenty, my lovely big sis, e jor pardon wunmi and me too”.

The post My colleagues depend on Babalawos – Remi Surutu blows hot after celebrities shunned her mother’s burial appeared first on TRENDJAMZ.