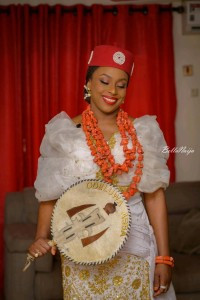 Today, Adichie shared a video of the moment she was adorned with the traditional red cap and hand fan with her name and title inscribed on it.

In the caption of the video, she wrote: “I am the first woman in my hometown to be made a chief, and it makes me happy to know that more women will follow.”

“Culture does not make people, people make culture,” she continued in her Instagram post, adding that “Cultures thrive when they best serve and reflect the people. Ours must become a culture that celebrates achievement, whether it comes from a man or a woman.”

For Chimamanda, the highlight of the ceremony “was the sight of many children on the dusty road, laughing and waving and shouting ‘Odeluwa!’ Amongst them, I hope, were little girls with their hearts full of dreams who feel encouraged to keep trying, to keep going.”

This title is the latest in a long list of awards and recognitions the globally celebrated author has received from indigenous and International organisations.

Earlier in October 2022, she became the first African woman to receive the W.E.B Du Bois Medal, Harvard University’s highest honour in the field of African and African American studies. Also, in October 2022, at the BBC New Broadcasting House in London, Chimamanda delivered the landmark first BBC Reith Lecture for 2022. The lecture, which debuted on November 30th 2022, is being broadcast on BBC Radio.

See more photos from the ceremony below

The post “… more women will follow” – Chimamanda Ngozi Adichie on Being the First Woman to be Made a Chief in her Hometown(photos) appeared first on TRENDJAMZ.