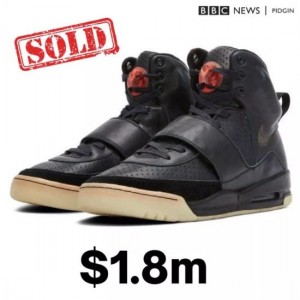 Kanye West’s Nike Air Yeezy samples have sold for a staggering 1.8 million in a private sale, making them the most expensive sneakers in the world. The shoes blew past their original valuation of $1 million and fetched the highest publicly recorded price for any pair of sneakers, confirmed Sotheby’s auction house in a statement on Monday.

The American rapper premiered the Yeezy prototypes in 2008 at the 50th Annual Grammy Awards, although the style never officially hit shop shelves. Today, Sotheby’s confirms they are the first recorded sneakers to sell for over $1 million.

The shoes, which West’s very own size 12 pair, were acquired by RARES — an investing platform that allows users to buy and trade shares in limited edition and highly sought-after sneakers. CEO and co-founder of RARES, Gerome Sapp, said in a press statement that purchasing the Grammy-worn pair was akin to buying “a piece of history”.

“Our goal in purchasing such an iconic shoe,” Sapp continued, “is to increase accessibility and empower the communities that birthed sneaker culture with the tools to gain financial freedom through RARES.”

Brahm Wachter, Sotheby’s head of streetwear & modern collectables, said in a statement that the sale “speaks volumes of Kanye’s legacy as one of the most influential clothing and sneaker designers of our time.”