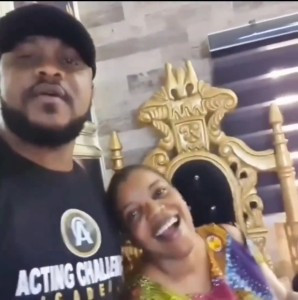 Empress’ former fiancé, George Wade, began blackmailing her and releasing her n*des after their relationship ended.

Empress Njamah, the popular Nigerian actress, has spoken to her fans.

She spoke for the first time since her ex-fiancé began leaking her n*de videos online.

She released a video from her home to let her supporters know that she is well and alive.

The actress, who fled her home after her former fiancé hit her – an act he admitted to LIB – and seized her passport, revealed that she is grateful to her followers for their support. She added that she is also be happy to be free of him.

She said: “I’m excited, my freedom, my life, most of you guys don’t know the story.”

Empress’ former fiancé, George Wade, began blackmailing her and releasing her n*des after their relationship ended.

Watch her speak in the video below.

The post I’m Good, I’m Alive – Empress Njamah Speaks After Her Ex-Fiancé Leaked Her N*ked Videos, Thanks Her Supporters appeared first on TRENDJAMZ.