“I have sent a message to DSS, there’s a plan to kidnap BBNaija winners” – Kemi Olunloyo 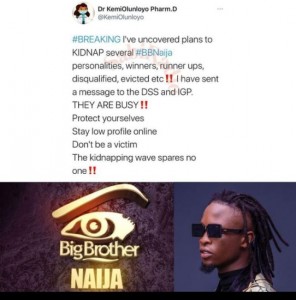 Kemi who made this announcement on her Twitter page reveals that she has exposed this scheme by reporting to the DSS to take action on the alleged kidnappers.

According to her, she advised the BBNaija winners and runner-ups to be mindful and stay low online to avoid being a victim.

“I’ve uncovered plans to KIDNAP several #BBNaija personalities, winners, runner-ups, disqualified, evicted etc !! I have sent a message to the DSS and IGP. THEY ARE BUSY !! Protect yourselves Stay low profile online Don’t be a victim The kidnapping wave spares no one !!”

Here’s what she tweeted;

The post “I have sent a message to DSS, there’s a plan to kidnap BBNaija winners” – Kemi Olunloyo appeared first on TRENDJAMZ.