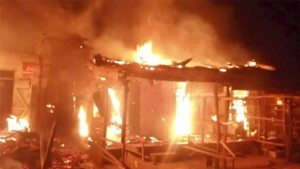 A resident, who was caught in the violence said, he first saw people scampering in different directions and in the wake of the confusion he saw shops and houses being set ablaze by miscreants.

A fresh communal clash has caused a lot of commotion in Adamawa State.

Several houses and shops were destroyed in the fresh communal violence between Waja and Lunguda communities in Lafiya, Lamurde Local Government Area, of Adamawa State.

The clash according to residents erupted a day after the New Year celebration.

A resident, who was caught in the violence said, he first saw people scampering in different directions and in the wake of the confusion he saw shops and houses being set ablaze by miscreants.

Another resident, Sabo Ahmadu, who lives in Boshikiri, disclosed that the violence between the Waja and Lunguda speaking settlement erupted between 6pm and 7pm

“The fresh clash erupted between 6pm and 7pm in Lafiya where miscreants went on setting houses, shops and other property ablaze,” Ahmadu stated.

Though, no life was said to have been lost the Spokesperson for the Nigeria Police Force Adamawa Command, SP Suleiman Nguroje, who confirmed the incident to journalists, said four houses and 11 shops were destroyed in the violence which erupted at dusk.

Hostilities between Waja and Lunguda ethnic tribe, who share a long history of inter-dependence, in recent years has resulted in wanton destruction and lost of lives. Casualties from recurring violence which had been intermittent over the past six years has claimed over 100 lives with huge economic cost suffered by residents as farmlands, homes and properties have been destroyed in the warring communities.

In 2022, the two state governments signed a peace accord and jointly implemented a harmonised version of recommendations by a judicial panel of inquiry, set up to look into the immediate and remote causes of the communal disturbance by a bilateral peace committee

Meanwhile, the Commissioner of Police in the state, Sikiru Akande, on Tuesday visited the scene of the violence, following the restoration of normalcy in the affected areas by security operatives. The CP had during the visit promised investigation into the disturbance leading to the arrest of the perpetrators of the fresh disturbance in the area while vowing tougher sanctions on anyone implicated in the disturbance.