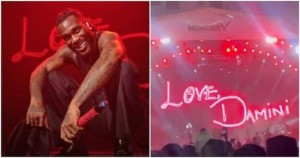 Burna Boy said that despite all the negative things that have been said about him, he still loves his fans dearly and anyone who doesn’t like him “will be punished by God.”

The highly controversial Afrobeat sensation disclosed this while addressing his fans after he showed up 7 hours late for his concert at Eko energy city, Victoria Island, Lagos.

The ‘Last last’ crooner who was billed to headline the show-themed ‘Lagos Loves Damini’ concert which was scheduled to start at 7 pm on Sunday, January 1 was nowhere to be found on the stage at 3 am on Monday, January 2.

After eventually mounting the stage, the artiste used the opportunity to get some things off his chest and listed out some of the negative things Nigerians have said about him in the past.

According to him, even though Nigerians have in the past accused him of killing someone at Cubana night club in Lagos and that his mother danced for the late Afrobeat Maestro, Fela, he still loves them dearly.

He, however, maintained that if not for the sake of his fellow artiste, Seyi Vibes, he would have left the venue and gone home without performing at the concert.

In a now trending video on social media, he said, “Just to show you say I still love una, I no go even lie for you, If no be Seyi Vibes sef I for don dey go house but I dey here with una after una don talk say I kill person for Cubana, after una don talk says my mama dance for Fela, no wahala I still love you na why I dey here, so if you like no love me, na God go punish you.”

See the video below…