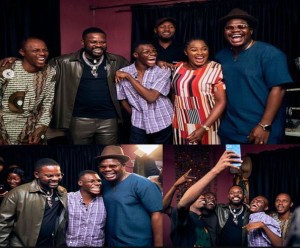 Folarin Falana, the popular Nigerian rapper, who is simply known as Falz, and content creator, Adebowale “Debo” Adedayo, aka Mr Macaroni, have teamed up to surprise their physically challenged fan.

The duo recently fulfilled the dream of their fan identified as Adebolu Adejobi by paying a surprise visit to his home.

Adejobi is a cerebral palsy patient and a child advocate.

In an interview with Michael Spyder, Adejobi had spoken of how delighted he would be to meet his favourite celebrities Falz, Mr Macaroni, comedian Pastor Remote and singer Adekunle Gold.

Two of his favourite celebrities decided to make his dream a reality by showing up at his home unannounced.

Falz and Mr Macaroni, accompanied by Michael Spyder, were received by the lad’s parents at their abode.

Adejobi, who was in another room, screamed for joy as he entered the living room to see his faves standing there.

He hugged Falz and Mr Macaroni after which the former gave him a bag containing gifts.

They said the visit was inspired by a video they watched online wherein he had expressed his desire to meet them someday.

After taking pictures in the living room, Mr Macaroni gave the lad’s guardian a bundle of cash for him as he got set to drive off the scene.

Fans have continued to hail the duo for putting a smile on their Adejobi’s face and more importantly, fulfilling his dream.

The post Falz And Mr Macaroni Team Up To Surprise A Physically Challenged Fan (Video) appeared first on TRENDJAMZ.