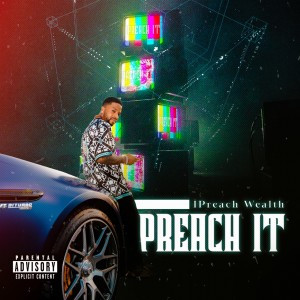 Finally here, the wait is over but the momentum keeps gathering as the Afrobeats singer, Ayoola Oluwaseun David, popularly known as IPreach Wealth serves his fans hot.

Before now, IPreach Wealth has proven his level of artistry and music leverage with different hit songs which have done very well and are still making waves both on air and on all streaming platforms across board.

He has been able to deliver hit songs such as ‘Celebrate’, ‘Endure’, among others. But now, he said it is high time he dropped a body of work to further prove his versatility and hard work. For him, the body of work would better sell him more to the rest of the world.

The title of the Extended Play- EP, according to him, has been named ‘Preach It’. He said he sees himself as a preacher who has been preaching to relay messages of happiness, joy, hopes and positive vibes to the people.

“I have been a preacher of good tidings all the while, and now I want to register that fact. The real preacher is here and coming again with good tidings. I want my fans to stay tuned as they anticipate my new project.”

Mic’Dibia – Power Of The Mic EP