#ENDSARS: ”You are a hero”- OAP Dotun hails DJ Switch 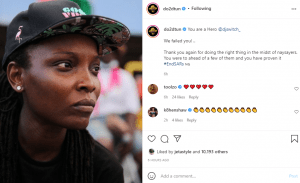 OAP Dotun has taken to his Instagram page to celebrate DJ Switch after the Lagos panel of Inquiry on the October 20, 2020, Lekki tollgate shooting incident, indicted the Army and Police and also described the incident as a “massacre”

The panel on Monday, November 15, turned in its report after one year of investigation and in the report, security agents were indicted for shooting at the protesters. The Federal government had repeatedly denied there was a ”massacre,” and DJ Switch was vilified by some people. Recall that DJ Switch did a live IG session from the scene of the incident on that day.

Reacting to the new development via his IG page, Dotun hailed DJ Switch and called her a hero

”You are a Hero @djswitch_

Thank you again for doing the right thing in the midst of naysayers. You were to ahead of a few of them and you have proven it #EndSARs ‘

The post #ENDSARS: ”You are a hero”- OAP Dotun hails DJ Switch appeared first on TRENDJAMZ.