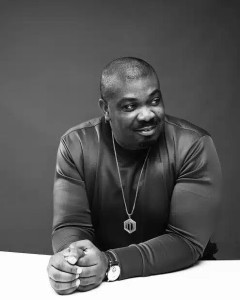 Popular singer and music producer, Don Jazzy has opened up why he can’t be in a relationship with one woman.

In a podcast with popular OAP, Nedu Wazobia, the Mavin boss said that he hasn’t gotten to the point where his interest can be in only just one woman.

According to him, he hasn’t yet figured out how other people can like a single person and then put off their interest in other women because he has, at the moment, never felt the need to do so.

While making his point, he gave a scenario where one lady he likes comes to an event with another lady, and he could just at that moment begin to have interest in the second lady as well.

Don Jazzy added that he doesn’t mind his partners also being in a thing with other people if they feel they need to do so.

Watch him speak below:

The post Don Jazzy opens up on why he can’t be with only one woman (Video) appeared first on TRENDJAMZ.