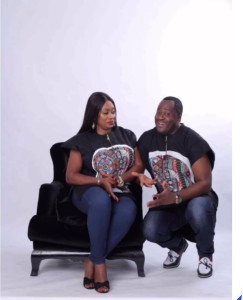 Celebrating on Instagram with a video comprising of some of their recent photo collage, Desmond Elliot wrote “19 years just like yesterday. Luv u more mi Babamai. So they meant it when they said we would grow old together”

This is coming almost a year after it was alleged that Desmond Elliot cheated on his wife with Ghanaian actress Lydia Forson.

The blogger added that Lydia Forson also slept with Desmond Elliot in a hotel during a visit, and his wife caught them in bed.

Also, Gistlover alleged that Desmond Elliot‘s has a secret baby mama, who happens to be the elder sister of fast-rising actress Sophia Alakija.

From the chats leaked by Gistlover, the baby mama, who was identified as Halima Warde Laraba Rammal, was seen begging Gistlover to delete the post she made by exposing her as the actor’s secret baby mama.

Desmond Elliot’s baby mama added that she would make amends by correcting her baby daddy over the leaked video.

The father of four was also accused of allegedly having a secret affair with an alleged quack cosmetic surgeon, Dr Anu.

According to Gistlover, Desmond’s wife did not know about the actor’s extramarital affairs.

Since these cheating allegations against Desmond, he has been extremely quiet on social media, and he has also turned off his comment section to prevent the public from storming his page with negative comments.