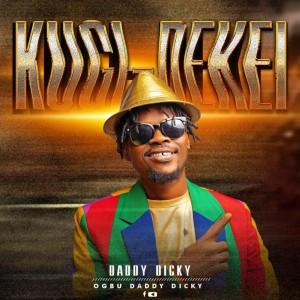 He attended St Bananas primary school in ifom ondo state before proceeding to ifom comprehensive high school same town which he rounded up his school section in 1999, then decided to enter into music as a career with Righteous Man in 1990 and in 1992 he then proceeded to ENO LOUIS MUSICAL MIND in Edo state where he is currently living till date, Dicky graduated in the year 1993, Ogbu daddy dicky was born into the family of Ogbu Alexander Onyesom who hails from Ezionum Community, Ndokwa Local Government Area of Delta State. Before his father gave him some money to buy master type for his album recording, Then after he contacted Righteous Man for his album recording the Music album was produced and directed by Righteous Man and sponsored by himself and his late father.

And they handle over the album project to a music marketing company called Reality music for sales and distribution, The first album titled “OUR FADA” was released in the year 1996 & He was 23 years old then, One of the tracks in the album called “Kugidekei” was a blast in this nation that brought him to limelight the song became popular and loved by fans with the unique dance steps along with it.

Daddy Dicky was attracted and signed into Ivory music in Lagos but something happened he lost the contract because of his former music label called Reality music the boss didn’t allow him to go because of the contract signed. After many years Daddy Dicky was not to be found any more so many people thought he was dead not until recently in November 22 2022, he was seen by a young musician called Uwaifo Peter De Rock, he was so happy to see him again, “he said daddy dicky your song made my childhood I will do everything within my power and with my platforms to make you stand again”, that’s my promise he quote!!!

Check Out This AMAZING hit “Kugidekei” Below!!!

Spice Vision – Only God Be Jagabam