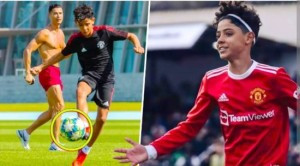 After giving a fiery interview in the middle of December, Cristiano Ronaldo decided to cut relations with both his old team and the media.

The club’s academy was where his son, Cristiano Ronaldo Jr., was playing, but he has since left and is once again a member of Real Madrid’s young teams.

Moving from Madrid to Juventus and then Manchester has been a major theme in Cristiano Jr.’s youth career, much like his father. He’s back at Los Blancos, where his father had been training to stay in shape while he searches for a new job at the age of 37.

“I want my son to be a player,” Ronaldo stated in 2016, reiterating his hopes and aspirations for his son. “He should play football, just like I do. He reminds me a little bit of an athlete, in my opinion. He has physical attributes. He is a very young child—only five years old—but he adores football. That’s a major plus.

“I have 30 balls at home. He is always with the ball and he loves it. But I will not force him to be a player because it comes naturally. It has to be his choice. He will be whatever he wants to be, I am not going to push him at all. But obviously, I want Cristiano to be a player. A top one, like his dad.”

Cristiano Jr. had also previously called on his dad to continue to play football so that they could grace the pitch together. The Portuguese football icon said in 2019: “Cristianinho puts pressure on me sometimes and says: ‘Dad, keep playing for a few more years so we can play together.’ It’s going to be difficult, even if I still have a few years to give…”

In the summer, Ronaldo tried to leave Manchester but there weren’t many interested parties, making it difficult for him to do so. Chelsea and Bayern Munich were among the teams mentioned, but neither decided to pursue his signature. Sx months later, it seems there aren’t many possibilities.

In light of this, a relocation to the Middle East may now be in the works. The five-time Ballon d’Or winner may end his career away from Europe thanks to tempting offers from Saudi Arabian club Al-Nassr.

A seven-year contract that has been offered appears to put him at the top of the sport’s rich list and earn him nearly £1 billion. Ronaldo is expected to play at the club for two and a half seasons, before retiring to take up an ambassadorial role.