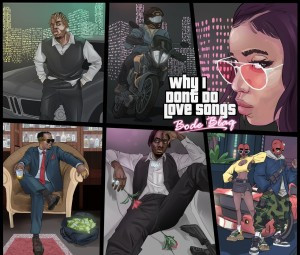 This collection of 13 tracks is a powerful and emotive journey through his unique blend of hip hop, afro-pop, rap, and R&B, showcasing his incredible talent as a songwriter and performer.

In this album Bode Blaq explores themes of heartbreak, self-discovery, and the complexities of modern relationships. From the exciting intro through the top-notch production that elevated Bode Blaq‘s already impressive sound to new heights, each track oers something new and fresh for listeners to enjoy.

“Why I Don’t Do Love Songs” is essential listening for hip-hop, afro Pop and rap enthusiasts, as well as anybody seeking real and authentic music.
Bode Blaq has put in a tremendous amount of time and work to create these songs and the end result is well worth it.

In order to create an original and one-of-a-kind sound for the album, Bode Blaq enlisted talented producers like Damayo, Joka, Whalez, Walitali and Supplia.

The album also features renowned content creator and actor Oli Ekun (Agba) in the intro and Maka, the Queen of Soul in the soulful ballad titled “For the Money“.

Since he forayed into music about 7 years ago, Ogungbemi Olabode Stephen aka Bode Blaq has distinguished himself as a quintessential songwriter, rapper and recording artist.

His discography is amazing and inspiring and so much creativity and artistic gusto are displayed in his poetic narrative and candid attitude toward issues. This has earned him a dedicated fan base and “Why I Don’t Do Love Songs” is sure to win over even more listeners.

Simply put the Why I Don’t Do Love Songs album is a distillation of Bode Blaq’s machismo and an explanation of his vindictive lifestyle of rebellion against love and its elements.

The album is now available on all major streaming services.