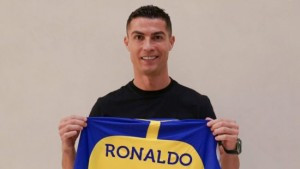 This ends weeks of speculation about Ronaldo’s future as a free agent. The five-time Ballon d’Or winner signed a lucrative two-and-half-year deal with the Saudi Arabian outfit and is expected to earn around £173 million per year in the Middle East.

Confirming that the Portuguese football star is now signed to the club, Al-Nassr tweeted;

“History in the making. This is a signing that will not only inspire our club to achieve even greater success but inspire our league, our nation and future generations, boys and girls to be the best version of themselves. Welcome Cristiano to your new home.”

“This deal is more than just writing a new historical chapter. This player is a higher example for all athletes and youth in the world, and with his presence in Al-Nassr, we will move forward to achieve more success for the club, Saudi sports, and future generations.”